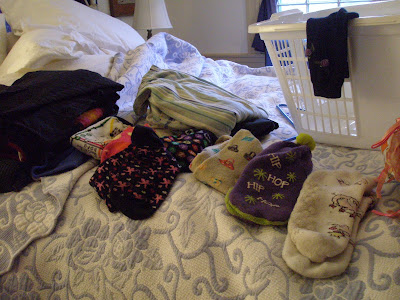 I'd be pretty happy if life had this kind of post laundry neatness. Right down to the one missing sock, for piquancy. Because who knows where it went - into the great drier in the sky perhaps.
To put it another, or rather the other way:
"It's like when you put instant rice pudding mix in a bowl in the microwave and push the button and you take the cover off when it rings and there, you've got rice pudding. I mean what happens in between the time when you push the switch and when the microwave rings. You can't tell what's going on under the cover. Maybe the instant rice pudding mix turns into macaroni cheese when no one's looking and only then turns into rice pudding. We think it's natural to get rice pudding after we put rice pudding mix in the microwave and the bell rings, but to me that's just a presumption. I would be kind of relieved if every once in a while, after you put rice pudding mix in the microwave and it rang and then you opened the top, you got macaroni cheese. I suppose I'd be shocked, of course, but I don't know, I think I'd be kind of relieved too. Or at least I think I wouldn't be so upset because that would feel, in some way, a whole lot more real."
-A Stupid Tree Frog's Daughter(May Kasahara's Point of View:4), in The Wind-up Bird Chronicle