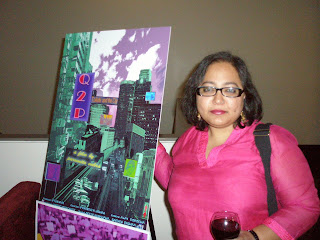 I've got high nostalgia for film festivals. I seem to remember them as a time of timepass and adde-baazi, all about films and friends. You took chhutti from whatever you were doing, you watched films, sometimes you dressed up a bit, you hung out, you met old friends and you made new ones.

Then, perhaps there was a sense that there were very few people and very few avenues and we weren't all in the game. Now, as things get easier, and in some senses they have, festivals feel very un-festive.

First there's the PES- Promiscuous Eye Syndrome - where, as people speak to each other, their eyes are actually looking slightly left of shoulder in case there's someone more important to be talking to. Then there's the RMS -Relentless Marketing Pressure. Pressure to be savvy, to make that ephemeral deal.

I know - these things are as old as hierarchy and viability. I know, we need to grow up, fund raise, network, sustain ourselves, not be smothered by our middle class gentility. We need to separate the (possibly casteist) discomfort with the idea of businesss.

Can't forget the films and friends, shouldn't, or, I am convinced, filmmaking will lose its simple pleasures, and films will lose their beauty.

Anyway, in LA, I had fun. Although I ate too many samosas! What is it with NRIs and samosas, yaar? Someone needs to publish a book of Alternative Appetisers for the Diaspora.

I did make some new friends too. Good hearted Srinivas, Rani with the bronze skin and others whose pictures I did not take due to being paralysed by sun and too much wine. 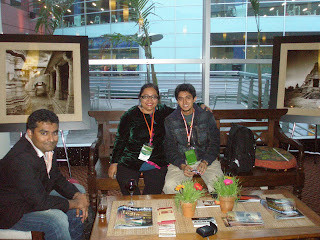 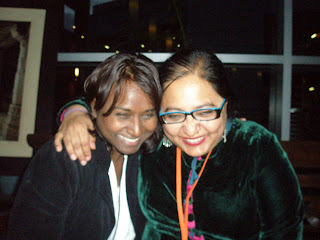 toorie said…
hey QT of Q2P fame - that's a great pic of you with the poster. wish I could have come hung around in Provincetown, but alas - some of us are wage-slaves, tied to desks creaking under the weight of ungraded (because) mediocre student papers and exams. sigh.
May 1, 2007 at 12:49 PM