Showing posts from June, 2010
Show all

and it's still raining, though not stories 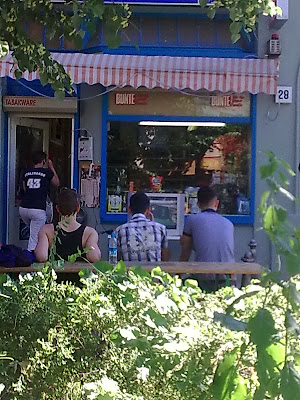 Mid-day column for the last two weeks... it comes to an end soon - and the sub-editor is showing this by giving the last one a title they used for an earlier column already! Perhaps I should ask for that job... My friend P called up annoyed one day, scolding me for using a word she did not understand (au courant and pulchritude). I felt this was a good way for her to learn new words - but maybe the sub also does not understand some words and feels fed up and decided - yeh tou generally against normalcy type of character hai, so when in doubt let's just title the column Out of the Box. Anyhoo... Last Sunday's on Not Having The Number And the one before on Stories I'd Rather Not Have (or Longing for the Ones I'd Like To) Meanwhile here in Berlin it is summer. People have put TV sets out on the pavement and were watching the match on the street with beer in hand. I was told that if Germany lost the match yesterday, against Englad, there would be big, grown men walki
4 comments
Read more

June 13, 2010
I used to think writing a column is like a little craft exercise - each time I've written one, I set myself a different writing task and try to keep at it. I find I get good at one thing - but often it becomes a kind of vice, a tic if I'm not careful. Here are my last three Mid-day Columns On archiving and film preservation in India On the AOL "assassination attempt" And on Love, when it's not turned out as we wanted Now I realise it is more like being a different part of your personality - as today I went looking for a very old column I wrote for Mumbai Mirror in 2005. One could argue that that's life anyway, trying on a different part of your personality in different phases of your life...anyway the search for the column was prompted by the weather which has been promisingly cloudy but which refuses to rain.. HEAVY CLOUDS BUT NO EGGS After the exalted sweaty suffering, when it rained last weekend, what could be better than to pile into a rickshaw a
7 comments
Read more
More posts