Showing posts from 2012
Show all

November 24, 2012
Outrage might not have been an inappropriate response to the discovery that a Class VI CBSE text book published by S.Chand and Sons and titled New Healthway: Health, Hygiene, Physiology, Safety, Sex Education, Games and Exercises says that non-vegetarians "easily cheat, tell lies, they forget promises, they are dishonest and tell bad words, steal, fight and turn to violence and commit sex crimes." But perhaps we should be more concerned that while the book has been in circulation, no one thought it fit to point out its problematic content, which also included pronouncements like “to get married without earning a bad name is every girl’s dream.” Did no one point it out because these prejudices more or less synced with the average school teacher’s world view or because no one is actually reading any text books in schools? Who cares? Not the educational establishment apparently. On TV, one school principal declared they would discontinue the book because “This
1 comment
Read more 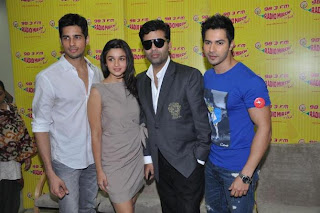 This week's Mid-day column. By the time this appears, Karan Johar’s new film, Student of the Year will be out and probably have been declared a box office hit, endorsing Ram Gopal Varma’s remark, made with his customary affection for KJo that it will out-hit "3 Idiots." I don’t plan on watching this film. That’s not because it is KJo’s first without Shah Rukh to whom love has tied me for life, despite recent misdemeanours and meltdowns. I think the film will be quite ok with me not watching it, because we both know, I was not one of the people the marketing people were counting on as audience. Yaniki, it is not made for people like me. Which is supposed to be part of the film’s merit. Yaniki, it’s not for the arty farts but the ‘general public’, implying they are the majority, hence this is like democracy, right? Wrong. The multiplex going audience does not constitute a majority of the country, just the majority of a certain elite, but theek hai, to eac
Post a Comment
Read more
More posts