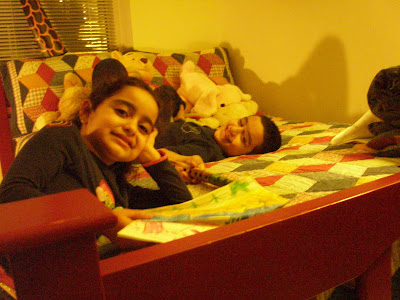 For the first time, I got to spend a while and get to know Rohan and Ruhi, my cousin Supriya's kids. It's very nice to be the visiting Maasi who is good at something (in this case figuring out iPods - although how can a 6 year old have an iPod?!!). Rohan was deeply concerned at all times that the CD would get erased if I transfered the tracks to the computer. After allaying these concerns, and syncing his iPod to the library I was rewarded by the shiniest little boy eyes, that look of unadulterated delight which eclipsed my reservations about kids having too much stuff nowadays. He sat listening to the music so intently and if he came to a song he didn't know he'd spring up and say - Maasi, there are some not expected songs in here! On being told I was a filmmaker he began mugging like crazy and at one point shyly admitted to me - "I want to be a movie actor when I grow up".

Later that night he and Ruhi prepared a little performance for us. Since they go to a Catholic school, this was one of those songs to Jesus that sound a bit embarrassingly sexual ("I can feel your love forever etc"). 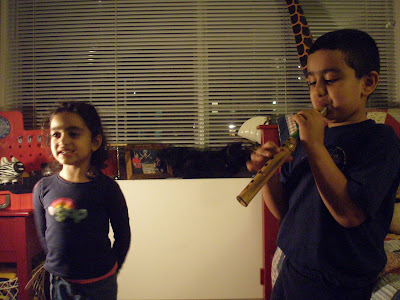 When I praised Ruhi's singing she stood there thinking for a minute and suddnely erupted into an encore unasked - only this was an R and B version of the song, Whitney sized voice and all, so we were impressed again. Or rather, I was impressed. Parents were more like besotted with pride. But when the kids wouldnt' stop , they started to say to me in Hindi - oh oh, they're carried away. Was strange to feel that the kids didn't understand a word of what we were saying as if they were hoity toity white salespeople in Bergdorf's or Bloomingdales or something. 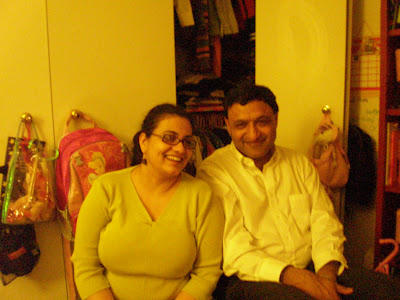 
Later Rohan was traumatised because apparently he hadn't really been playing the flute - " I cheated," he wailed, anticipating serious, unimaginable retribution. "I was just making the sound of the flute with my voice." Frankly, he fooled me and since the audience, like me, are mostly plebs, he may just get his movie actor wish. 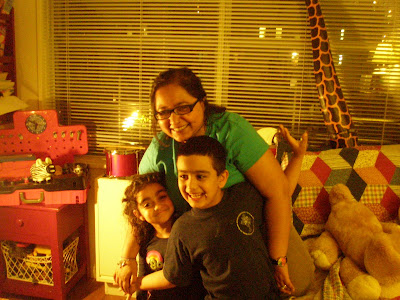 MASI GOES BACKSTAGE TO GET PICTURE WITH STARS