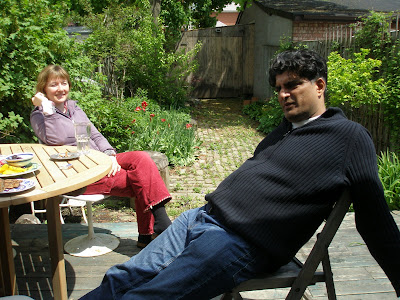 Went to see my friends Krishna and Gisele in Toronto mid-May. It must be the first time in a decade or more that I went somewhere to simply meet my friends. Of late life has always taken me to a place where there were friends, but the reason for being there was always work. It must be that way for most people now - because folks kept asking what had brought me to Toronto and they'd always be a bit surprised that it was just to see friend.

It's a liberating thing to just be seeing friends. And so nice to see them in their homes, to see how the colour of a wall has changed, go with them to their favourite shop or Chinese restaurant, just be part of that texture and know them more fully as them, not only in relation to yourself. 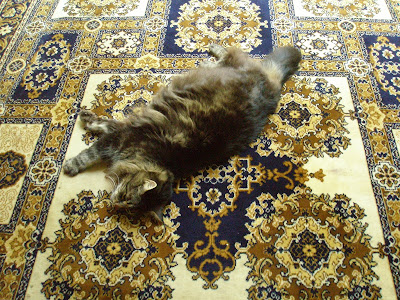 And a lovely thing to know you've known each other for years - Krishna and I became friends when I used to work for Anand so that's really prehistoric times: 15 years now, and Gisele and I have been friends for over 10. Clancy, Gisele's cat was a new friend to make though - since it's the first time I stayed at Gisele's. I slept deep and long in Gisele's living room with it's skylight, uncaring of the sun on my face. It was somehow very peaceful. Gisele, in her nice new age way said - that's because there's been a lot of laughing and happiness in that room and you've been part of it. Well, new age or not, it IS a nice thought. I do remember several times of being in that room half hysterical half apalled while G and Noah and other friends did angular dances to old records and relived the '80s (on the whole not aesthetically advisable though).

G had a dinner party and so I also met my friend Kelly after 7 years I think. I feel sad I didn't take a picture of her in all her red haired glory. She looked lovely and happy though. No one relived the 8os this time. We mostly sighed about the 90s and bitched about the 00s. We grow old, we shall wear the bottoms of our trousers rolled.

Gisele and I went on a very rainy and greedy walk through Chinatown and Kensington market - we ate Senegalese fish, chorizo empanadas, greasy Taiwanese chive rolls, and ended up at her friend Ki's Malaysian restaurant where we ordered and polished off a shocking number of delicious things and drank the most amazing lychee martinis. Ki turned out to have Bollywood songs on the stereo - apparently Hindi films were big in Malaysia when he lived there in the 70s - especially Bobby! 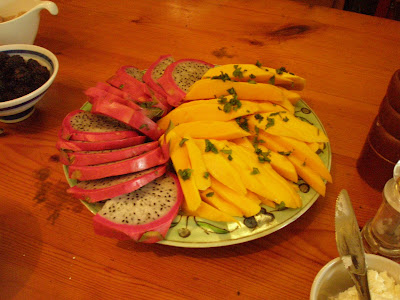 In Chinatown we bought dragonfruit - which is quite nice, fresh and like a white kiwi without such an intense flavour. Also Mexican mangoes which should basically not be allowed - no taste, not to us alphonso reared pigs.