a swati moment or two...

I have to be lured out by various means - well only one means works really and that's decadence. So I readily agree when Swati suggests we meet for boozy long drawn out lunch at Mainland China, despite my suspicion that she has chosen Mainland because it is owned by Bengaalees. When I get there I see that Imperial Garden which once stood next door has shut down because their lease expired - now just an inscrutable Chinese sign over a bricked up entrance of a building being re-organised. I felt sort of sad looking at it. I always hate it when the old gives way to the new and all that other zen stuff... 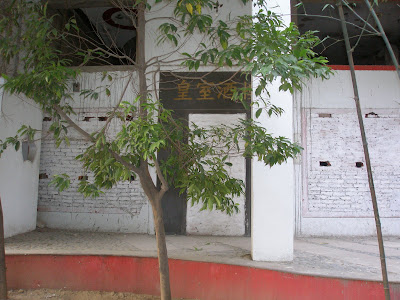 We are the first to arrive and more or less the last to go at Mainland China so it's a good thing we were paying customers.

After her first capiroshka Swati felt despondent (or maybe drunk) and also like going to the loo. 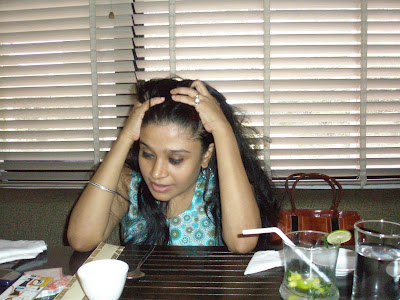 She returned with a shawl much to my amazement. Swati has been known to do several outlandish things in her time so I feared she had nicked the understated cloth of grey from some well coiffed South Delhi lady who is always in pearls and always prepared. 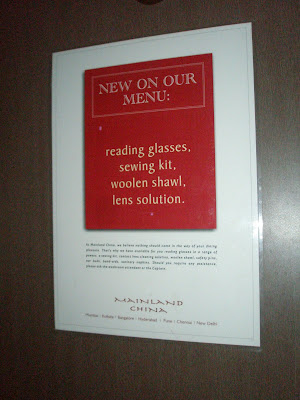 Way to go Mainland China. As Swati suggested - the sewing kit is probably for when you eat too much and bust a button.

On returning, I find Swati in deep conversation with the ladies who have occupied the table next to ours with cheery loudness. Before I can sit, the lady smiles at me and says, " I really loved Khamosh Pani." I sputter and Swati gives me that Little Jack Horner grin which usually accompanies this particular behaviour of hers, as if to say she has done something altruistic instead of shallow and show offy. I am polite to the ladies but then say, "Swati, I can't go and pee without your handing my excerpted bio-data to someone." "She's a wedding planner." says Swati adroitly, so I am deflected into suitable 'how interesting, how cool' etc. to the lady concerned.

"And I believe you are a documentary filmmaker and that is why you went down to the loo to take a picture of the sign." Is there anything Swati hasn't told them? Do they also now know my shoe size, college crush on a loser boy from KMC who I never spoke to ever and and which U-Special i took from Patel Chest to home?

I merely smile idiotically. Swati giggles because she has no shame.

Moral of the story - when out with Swati pee very fast and don't take pictures.