June 05, 2007
It was my last day in New York and it was crazily hot - full preparation for returning to the Indian summer. Of course I had a gazillion last minute things to do, including some mailouts at the post office.

So I walked to the post office in the sweltering heat, dripping sweat and period blood, stood in a long line while Americans did the nice thing and chit chatted with the postal workers instead of just getting on with it. A woman in front of me was reading the New York Times and started a sort-of-conversation with me. The kind where she's addressing the world, but I am the only one smiling politely in response. She complained about the Republicans and George Bush, quite loudly. Her tone veered dangerously between political indignation and post office line rage.

Then she started complaining even more loudly about
a) there being only two windows operating when a while ago there were four
b) people taking too long at the windows instead of just getting on with it. ("She's got a 100 international letters. And meanwhile that one's doing a transaction that's taking hours. I just want to buy a book of stamps. And god knows you can't get anything out of them machines here. " )Her complaints were heard by said people who looked at her askance. The 100 letter girl said in her Australian accent, "Well it's not our fault is it?" "I'm just saying", said our lady.

Finally it was her turn.

She:"I want two books of stamps. What you got?"
Postal worker: Star Wars and the American Flag
She: What? Don't you have anything else? Don't you have any flowers or something? People are getting married and I'm supposed to put a Star Wars stamp on them?
PW: That's what we have ma'am. Star Wars movie's just out.
She: But I don't like Star Wars! How can they force people like this? People are getting married - dont' you have flowers or something?!

After a very long time in which this discussion circled around and around, she left with two Star Wars, since she hated that less than the American Flag. And finally it was my turn.

Then I hurried back home dripping more sweat and period blood and struggled to zip my bags shut before Angelo, a car guy that Maria always gets, arrived to take me to the airport.

Once we were on the road, Angelo expressed regret at my leaving. Wouldn't it be nice if I could move to New York, he asked.
I tried explaining that I like living in India.
A:"But you can do well here."
Me: Um, actually I am doing pretty ok in India.
A: Yeah? But you could do well here. You could make a lot of money.
Me: I think in my work you don't make lot of money anywhere in the world, so guess I'll just visit from time to time.
A: Yeah? You know what? Why don't you marry an American, for visa like.
Me: Er, I don't think an American will want to marry me. I don't think anyone does.
A: Yeah? No, I could find you someone. My girlfriend's cousin, right, he married a girl so she could be here. You just gotta pay the person. Lots people will do that.
Me: Ah. Well, that's that then, I don't think I could afford to pay anyone to marry me.
A: Yeah? You could ask Maria.
Me: (politely) Ha ha, yes I guess I could, ha ha. Maybe I will. What's this route we're going by, I've never gone this way to the airport.
A: Yeah, it's less traffic.Why you don't ask Maria to sponsor you.
Me: Hmm
A: Yeah, Maria could sponsor you. You could make good money, you could be her babysitter.
Me: (genuinely) Ha ha ha. Yeah, now THAT's a possibility.
A: Yeah, knamean? She could sponsor you, you could be a babysitter.
Me: Yeah, I should really give it some thought.

Then, soon, looming before me, thank god, Terminal 7. A plane, Woh Lamhe on the baby monitor, chicken curry you can drop on your shirt.

Delhi airport, tubelight, my mum's missed call on the cellphone as she waits outside, and the rush and push of immigration lines. A little boy tries to catch my eye. I think he's mistaken. He comes up to me anxiously and says.

"Aunty, aunty, your shoelaces are open."

"Yes, beta, I know." I say through gritted teeth. All around the world, that's all people seem to want to communicate to me. So I have finally got.

THE SOULTION THE SOLUTION 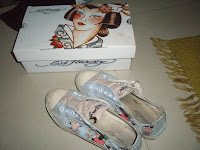 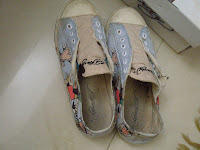 HOORAY FOR ED HARDY AND THEIR NO SHOELACE DESIGN

Anonymous said…
getting addicted to this blog of yours.....its a bit like having your own tabloid.and remember i'm