SRK’s persona evokes the kind of Indianness that denies categorisation into singular, exclusive identities. And thrives on making others feel welcome.

This essay was originally published in Outlook magazine, here. 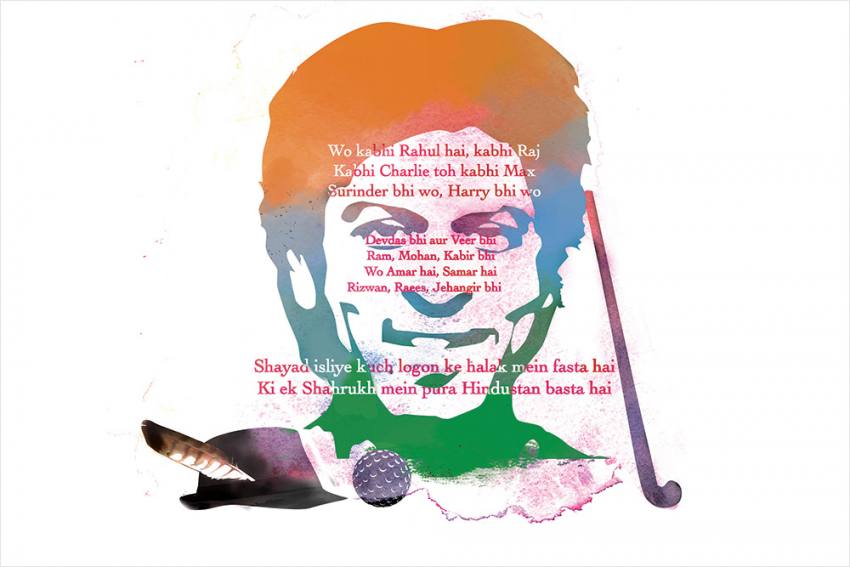 I too shared the poem on my social media. But it was not for its depiction of Shah Rukh as a digital collage of secular harmony, or what corporate HR likes to call diversity and inclusion. I often think of this posterised idea, common in liberal iconography, as the realism model of nationalism. More and more kinds of people can represent India—but on the basis of whose definition of India? And what happens to differing definitions? In other words, perhaps one idea of India (unity in diversity or Hindutva) is insufficient to convey Indianness, quite like realism is insufficient to convey all of reality with its tangle of desire, emotion and fantasy, or like marriage is insufficient to ­encompass the idea of love.

I shared the poem for something else: the love that infused it, as it infuses the fandom of Shah Rukh Khan across time and space, ­becoming a potent iteration of what it means to be Indian.

What does it mean to be Indian? This question drives countless debates about citizenship, politics, democracy and culture. These questions have also criss-crossed through Shah Rukh’s filmography, as is expected with a defining star of the nation. They have also sometimes gathered around his person, hinging on his religious identity, and then dissipated, he has famously said, because he is loved so much.

On Anupam Kher’s talk show on Colours TV in 2014, Shah Rukh spoke at length about his father, “who had not done anything much, but had performed wonders (kamaal)”, as a sort of explanation for himself. “I learnt this idea from him, of mehman nawazi,” said Shah Rukh. He went on to define mehman nawazi not so much as an action, but as an attitude, and one that partially explained his own stardom: “Somehow when I see someone, I just know how to make them happy and I want to make them happy.” 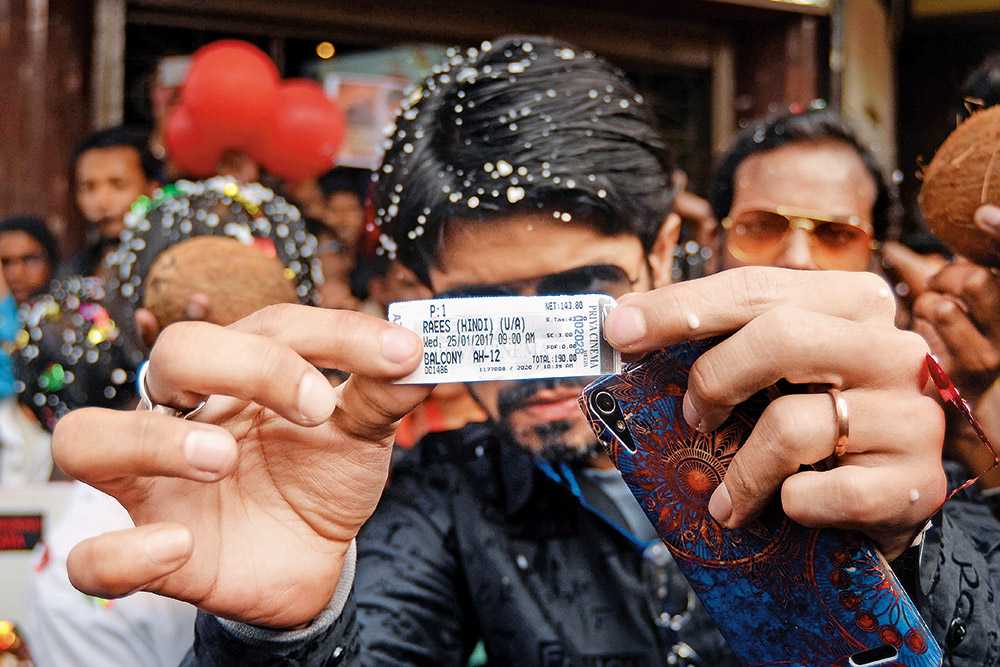 An SRK fan shows the ticket he bought to watch Raees

Mehman nawazi is a powerful concept, which cuts across South Asia as a defining self-­conception of our community life. It is not only the practice of treating guests well, but of ­making others feel welcome. To be a hospitable person, a mehman nawaz, you have to be an ­accepting person, of strangers and loved ones alike, and thus generate another feeling, also an untranslatable word, apnapan—to have a claim on each other.

Shah Rukh’s persona is an evocation of this kind of Indianness. In a recent Twitter thread where people described their meetings with him, each story was on attentiveness, care and affection, a soul-deep hospitality. There is no such thing as a boring Shah Rukh interview—because he brings everything to making the ­moment work, to bring this attentiveness and mehman nawazi to viewers too. But it gleams most in his humour, full of politically incorrect teasing. He teases Alia Bhatt about her millenialness, Anushaka Sharma about her drive, Anupam Kher about his baldness. This teasing, borderline insulting humour is familiar to South Asians, like the tart scoldings of dadis, as something you can only do when there is apnapan, when the jokes are scaffolded by love, ­respect and taking each other seriously. Shah Rukh’s respect for his women collea­gues is ­constantly on display in interviews, where he praises their abilities with genuine admiration, even when he thoughtfully, attentively suggests to Alia that she needs to master a more ­amplified Indian aesthetic: “She needs to learn a little adaigi, giving a little extra” (Koffee with Karan, 2016). It is this attentiveness that marks Shah Rukh’s loving intelligence and ­allows us a different view of the world. 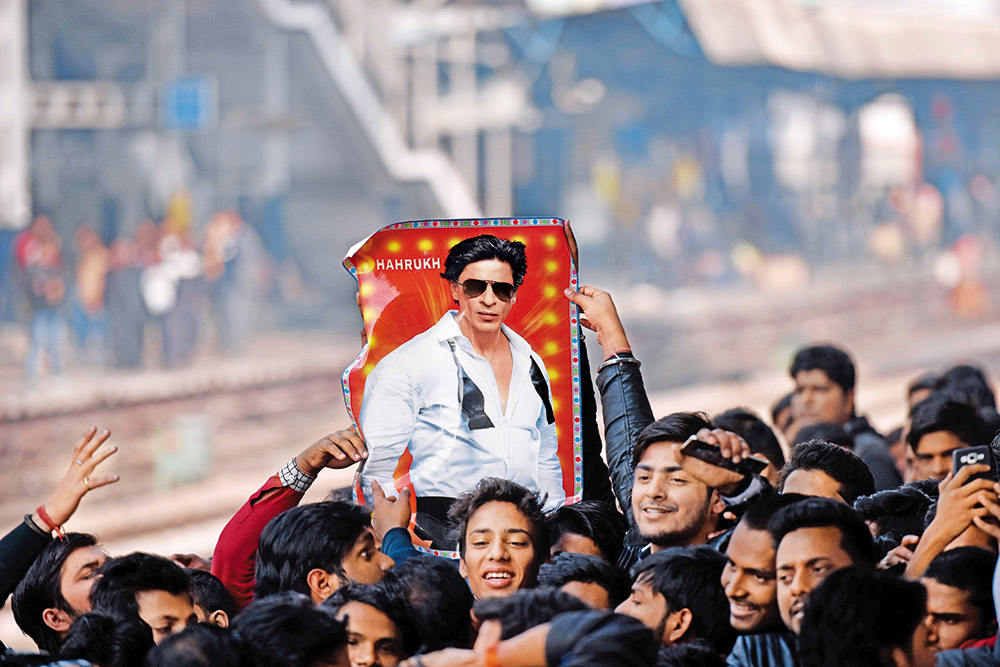 Fans wait for SRK at a railway station

The most touching example of this quality is to be glimpsed in Karan Johar’s 2020 show Bollywood Wives. A show full of camp and pulp, it follows the lives of four Bollywood wives, but is beset with an undercurrent of unease and discomfort. On the one hand, it tries to ­demonstrate that outsiders do become insiders in ­response to the (fairly fair) accusations of nepotism that are now woven into Johar’s image, like the uncompromising patterns on his myriad jackets. At other times, it defiantly parades the nepotism of inherited stardoms and preposterous debutante balls. Then it again tries to prove it’s a matter of luck and ­talent in an embarrassing and leaden scene, where Sanjay Kapoor (made famous by Madhuri Dixit singing I love you Raja) ­celebrates his big break after years in the ­industry despite being from a film family (bahut sun rahe the nepotism, humne toh kabhi nahin dekha, he says to his wife, while we cringe). It’s as if it just can’t confront or resolve all its contradictions with any grace and we too start to feel anxious watching this.

All of this enervation is diffused in one ­episode, at a party Gauri Khan hosts, by Shah Rukh. In a few quick vignettes, he paints a ­picture of each of the Bollywood wives: “I ­remember the first time I saw you, Maheep….” “You were a star we looked up to, Neelam.” He remembers details about them the way someone ­remembers your favourite dish and makes it each time you visit, like loving elders do with children. In that moment, the tensions seem to not resolve, so much as dissolve. We see the Bollywood wives through Shah Rukh’s eyes, for the girls with dreams and chutzpah they once were, even if their present is a little tawdry. Things change, and so must we, it seems to say, taking different realities along.

This hospitality has infused Shah Rukh’s film persona and given us a possibility not only to feel loved—but also to love and have our love accepted. Dilwale Dulhania Le Jayenge, the uber-Shah Rukh film, is often critiqued for ­domesticating love’s revolutionary quality. But seen through the prism of Shah Rukh’s hospitable persona, it reveals other meanings. It is a rare film in which the woman is not asked to choose between the two men in her life—her father and her lover. Rather, both must change, to accommodate her desires—a theme repeated in Chennai Express. Shah Rukh’s persona has held the hand of generations of India as it ­remixed old and new Indias, masculinities and femininities, creating space for many a non-­macho guy and many an unconventional woman to know they are worth loving. His non-heroic persona is not set up as a model, but metaphorically makes room for an evolving idea of Indianness, open to change with love, grace and vulnerability. 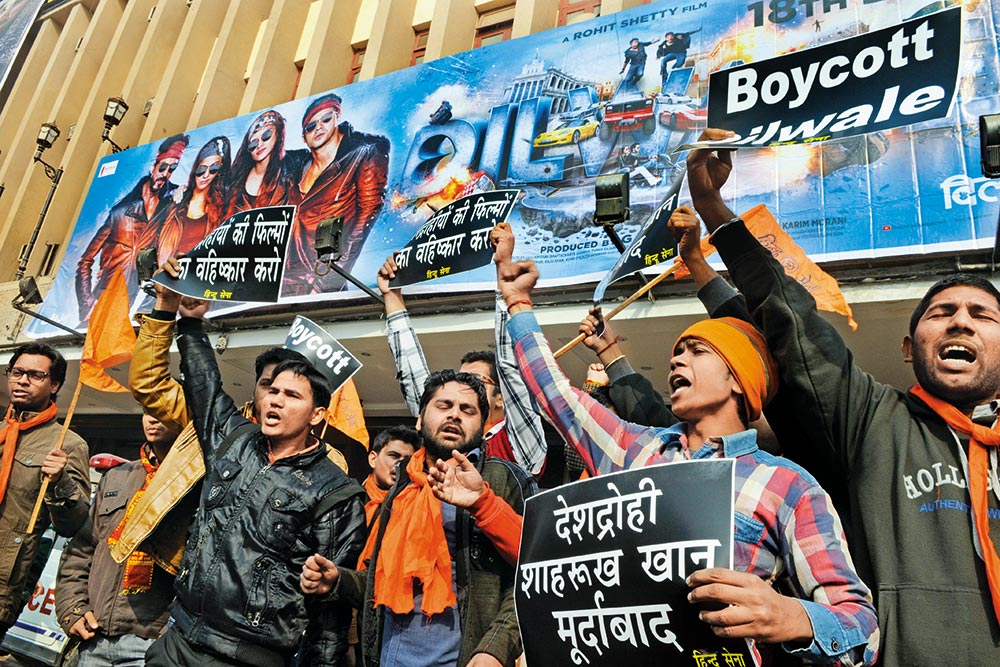 A protest against the screeing of an SRK film

There are pedants who mock Shah Rukh ­fandom by saying “he can’t act”. This is a ­literal-minded response to a dreamscape, to an aesthetic and way of being and belonging that Shah Rukh represents to his fans. It is very ­similar people who from the left-liberal ­position critique SRK as someone who has not made overt statements that defy the regime. Like the right wing, they can accept ­political-ness only if it is in their own image (aka ­realism), like a call centre IVRS line—dial 1 for counter-culture, dial 2 for democracy, no option to speak to a human agent for an ­in-between question. A mixed, embodied ­politics, because it is not easily legible and ­categorisable, arouses their condemnation, ­because it challenges their power to categorise and legitimise.

In loving Shah Rukh we agree that life and truth are ­complicated, and one ­meaning is seldom ­meaningful enough when it comes to being ourselves.

It is not entirely clear if one loves Shah Rukh for his on-screen goofy sexiness and charm or his off-screen wit and intelligence. Indeed, it is not possible to love one without loving the other—not because love is unconditional, but perhaps because it is its own condition, its own ethics and a capacious frame for holding many meanings. As the writer and teacher Vijeta Kumar told me, “Earlier, I loved him because girls in our family have eloped with boys after watching Dil To Pagal Hai and Dilwale Dulhania Le Jayenge. So, his films were banned at home, but our parents loved him enough to sneak out at night to watch his films, night show. Now I love him for his silences and smiles.” In loving Shah Rukh we agree that life and truth are complicated, and one meaning is seldom meaningful enough when it comes to being ourselves. He remarks on this in an angular way, in a recent interview with Anupama Chopra, where he mock-warns his daughter’s prospective suitors, with dire clichés, then laughs: “The fact that I say this like this means none of it is true obviously, it’s in jest. I would never invade her privacy in that way.”

To assume that people understand the ­implicit, that they get your joke, is an act of trust. And it also touches on an implicit aspect of mehman nawazi—the idea of being at home. A profound idea, tied up with belonging in its multiple meanings, like apnapan, that exceeds any definition which limits its meanings. You cannot be a mehman nawaz person, materially or metaphorically, if you are not at home, if you do not feel at home with yourself, so that you do not fear the stranger, the unknown, the ‘other’, but rather, have a way to greet and meet it, on mutual terms—for who knows, which stranger could become your moonh bola apna?

That Shah Rukh finds his humour deliberately misunderstood today when he said he will let Aryan do drugs and have sex by the time he is five or six says a lot about how ill at ease we are with ourselves as Indians today. In a market that has domesticated humour—which dances anywhere, with all kinds of partners—into an assigned location called ‘comedy’, perhaps it’s not surprising. The times are insistent that we make ourselves constantly legible within a limited vocabulary. Meanings may not be assumed, and hence they must be only singular.

But like many Indians who speak various ­languages, are at home with many faith ­practices and thrive in moonh bole rishte, Shah Rukh has denied categorisation, remaining markedly Muslim and frankly Indian, commercial and refined, earthy and urbane. In his double meanings he conveys that these identities are not so much one and the same as porous, overlapping, adjacent and fluid, meeting each other often in a place of mehman nawazi, of love, of exchange. They are home and the world, and we each have a right to be in both. 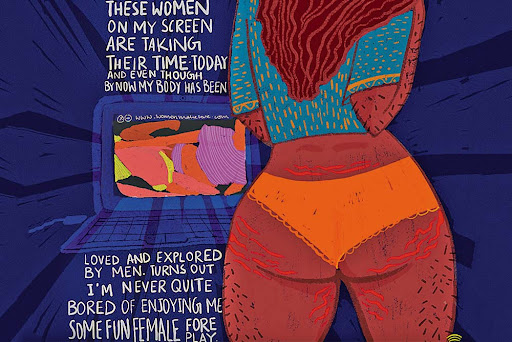