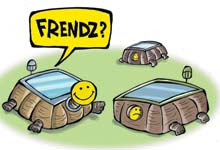 According to a new Canadian study “most Facebook users have low self-esteem.” You couldn’t tell from the friendship requests. It’s easy to laugh at the breezy: “Amazing pic wanna be a frenz”, “hey aren’t you the one who wrote/made XYZ film?” and “hi send yr nmbr as I need your inputs for my class assgnmnt.” Low self-esteem cannot explain this jaunty entitlement – poor upbringing might.

More complicated are silent strangers who know of you and have 10-100 “common friends”- but don’t introduce themselves, leaving you perplexed. Low esteem doesn’t explain this – excessive mother love might.

One thing does explain much of it – a crisis of contemporary behaviour. Today, more than ever before, we come in contact with large numbers of people, of different backgrounds and levels of achievement, but have very little idea how to behave with others, because good manners are considered square and courtesy or formality is old fashioned – and no new fashion has apparently been devised as replacement (though someone may be working on a good Facebook application).

Many disdain Facebook because they disdain networking. Some are idealistic, several disingenuous – because networking has been around longer than low self-esteem. Among 500 million users some are bound to be narcissists and depressives. You don’t need Facebook to channel your inner jerk – although Facebook might be one place you give him a turn. Many just seem socially clueless, an adolescent state reinforced by the lazy use of the word friends to describe the great diversity of relationships that exist in a society, to create the illusion that because we are on the same web page, everyone is the same as everyone.

These folks might want to check out Aristotle on Ethics, where he too used the term friendship to describe different social relations – but helpfully categorised them thus: 1) Friendship of utility: what we call networking, our parents called duniyadari and Mama Morton in Chicago describes as “when you’re good to Mama, Mama’s good to you” 2) Friendship of pleasure: friendly acquaintances, people we meet professionally or socially whose company we enjoy 3) Friendship of the good: abiding friendships based on love and shared values, interests and time.

True friendships of the third category are an ideal – shared with few and nurtured over time. As Aristotle says: “a wish for friendship may arise quickly, but friendship does not.”

However, friendships of convenience or of pleasure too have their place and genuine community can be achieved by treating them with the respect due – not thinking of them as inferior and therefore not deserving of our best behaviour – an attitude Facebook – and the internet generally - sometimes reveals. As if casualness of emotion means casualness of behaviour. At the heart of this is something we’ve become very comfortable with in the present culture – selfishness or self-interest. That we need only look out for our own requirements and get what we can from others without regard for what we offer in return. And if we can’t offer as much to acknowledge this debt through our respect. Don’t know about low self-esteem – but it sure is low esteem of others!

This is based on a fundamental miscalculation - the assumption that other people are stupid and fooled by false charm or brash informality; that generosity or tolerance exist not to appreciate but take advantage of. This sort of familiarity definitely leads to contempt, and people, no matter how kind, will eventually be fed up with bad manners and mediocre, self-interested “friendships” leaving one very alone in a crowd of 2,147 friends. And that sure could make you a Facebook user with low self-esteem.