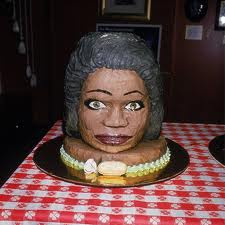 My column in Sunday mid-day for September 27, which resulted in some facebook argument between my friend who doesn't like any ambiguity on how we speak of Pakistan and terrorism.
I don't like to dismiss these arguments even if I instinctively don't agree because I have a terror of falling into any formulaic secular elite attitude - as if it is self evident what is progressive and what isn't. But I also can't identify with any vehement patriotism. So not fully able to understand the merits of the other side.
Anyway, in that vein, Shabana Azmi's slum cake makes an appearance in this column - but personally I have to say I don't feel as hugely outraged by it. I can see the intended joke but I think some of the annoyance is in response to the feeling that we are not exactly sure what the nature of Shabana Azmi's activism is, or what her politics are. I feel the cake joke reminds me certainly of the elites who are very sure they know what's good and bad for others - who feel comfortable about suggesting how things ought to be precisely because they are part of a ruling elite. That's why they are not confused about the humour of the cake. Whereas those who feel less convinced that their felt politics are the right politics - may not feel as strongly angry, but may also not feel as blithe about that kind of joke.
Anyway - it's noticeable that the media did not pounce on this cake. And not a word about Amitabh Bacchan's EXTREMELY bad manners in tweeting about party to gazillion people while party is still on. Given how holier than thou he is about everything otherwise, grumble grumble grumble...