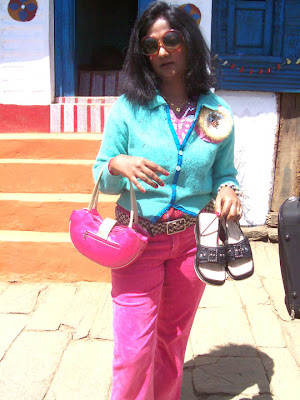 I recently watched Bela Negi’s film Daayen ya Baayen (Right or Left), which for all the tedious verbiage that fills our newspapers and magazines about the new space for independently minded (since it's almost all produced out of Bollywood, it's not independently produced often) cinema in India, remains unreleased, and un-promoted on the festival circuit for unclear reasons.

Without a doubt this comic drama is a labour of love and free from a lot of the generic quality that make films from India successful. It's a story in the mode of the droll, angular folksy narrative which is a tradition we haven't lately seen a rendition of, but the relief is in watching a film that does not feel puffed up and stiff with the desire to be seen as "world cinema" or "indie cinema" or whatever label is seen as cool. It's simply the film it wants to be.

What makes the film work - apart from the fact that its funny - is that through its rich local detailing and highly rooted story and characters, it creates a compelling portrait of the universal human desire to dream of utopias, to find in ourselves the best we can be: wise fools who want to love and be loved for the people we are and the poets we can be. In that it's got a clear sense of wanting to talk about some central human experience rather than be a clever description of some context.

The film fills us with a delight rarely found in recent Indian films: the delight of characters whimsical, eccentric, infuriating, flawed and funny in the way dreamers and hopers and no-hopers are.

Daayen ay Baayen is a densely textured tale of a man who returns a bit defeated from the city where he has gone to pursue his dreams, to his idyllic looking village– to his wife’s dismay at this reverse migration, a come down in this world if ever there was one. Indeed we understand her comic dismay compassionately once we pause from chuckling, because what can he do in this beautiful place where sheer rivers gleam, and trees sigh wetly and ghosts sometimes smile on full moon nights - but where a mixture of economy and culture robs men of ambition and possibility so that they sit around playing cards, drinking and farting around, making token plans of going to the city, while women slog. 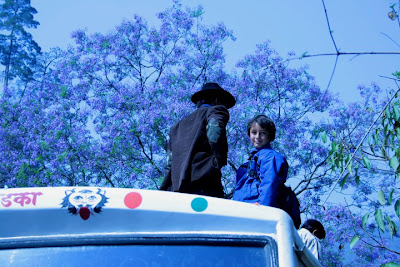 But Majila, the main character is full of an ebullient optimism to start an arts centre. In pursuit of this slightly elusive dream he influences school kids into writing earnest verse, earns the adoration of his son, the mockery of the villagers– and wins a bright red car in a slogan contest. The car sets off scrutiny and jealousy and perhaps a few wrong turns as Majila loses the way to his dream as all of us do, cast asunder by criticism, ego and the uncertain business of being human with its certain desire to be successful or to prove oneself right maybe. How we finds the way back again is a ride that manages to be both sweetly and darkly comic; he arrives at his end a hero who is very triumphant and a little, just a little, as he says, compromised.

This is not a flawless film - and the screenplay would have benefitted from much stronger structuring, because in its current form there is a slight diffusion of intent, and the film is not always consistent in terms what approach to plot it is choosing - the incremental one or the overtly causal/eventful one. So we might begin to wonder a little half way through where we're headed, a feeling not always offset by the strong sense of where we are. In other words, while each scene is lovely and specific in itself, sometimes the weave is not tight enough.

However, with its very sure mise-en-scene, inspired performances from a mix of Bollywood and local actors as well as amateurs and dialogue full of local sarcasm and humour the film stays with us both with because of its feeling of enjoyment - I found myself chuckling to myself for a couple days after at the though of different shots, or dialogue or character- and its deeply humane view of people. There is a school principal who loves to say "and miles to go before we sleep" as a homily for ending speeches or while giving advice; an old lady, Harduli, who has used her husband's freedom fighter pension to buy a shiny new pair of sneakers for climbing the mountain to get to work and as she tells a villager -"what else do I need but this and a good pack of cigarettes. Indeed she has loaned the money to everyone in the village, because she doesn't really need much else. There's Majila's sister-in-law who is embarrassed by his city jeans, all colorfully patched, and throws them away in the field, toothless men who complain about the government while playing cards, Majila's gift to his wife - a backscratcher for scratching his back and all sorts of little things that we relish while and after watching the film.

The film's accomplishment is that it shows us that not all Indian film entertainment – and it’s entertaining indeed – has to come in a Bollywood costume or with a mediocre, meaningless pretend-social message. I do hope others can see this film soon.