I want to see some dissipation in my face: Eartha Kitt, R.I.P. 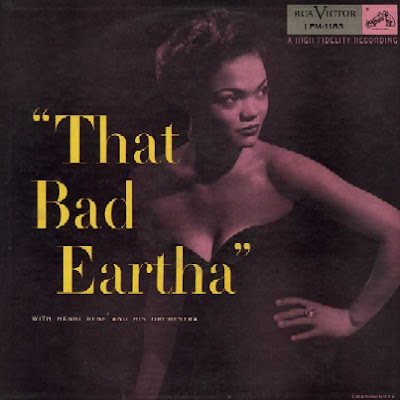 
The pre-globalisation nerd's window to western music (before you showed some enterprise of your own)was a handful of programs: in the mornings Play it Cool. In the evenings there was In the Groove. In the nights there was Saturday Date (well A Date with You to be precise) and Forces Requests. Although In the Groove for instance was presented by young people - the cool kids in college had often done some dabbling in this arena - very little of the music was actually contemporary. I imagine it's because the programing was limited by AIR's archive which wasn't exactly up to date. So it is that for structural reasons, our parents' nostalgia had to be our present - isn't that all of India's engagement with popular music for the most?

So mostly the music we heard was the songs my mum had taught us when the electricity used to go off: Lipstick on Your Collar by Connie Francis, Love Letters in the Sand by Pat Boone, Danny Boy by Jim Reeves. In the middle of it all there would be the occasional thrill of an Eartha Kitt song.

How can one explain the instinctive sense of connection one feels to a sensibility one has not yet begun to have, much less articulate? What are these connections, connections of really? It's not very easy to explain, though one knows it in one's stomach - or as Susan Sontag says in her famous piece Notes on Camp "A sensibility (as distinct from an idea) is one of the hardest things to talk about" - because the moment you try to pin it down, it slips out and becomes something else, changes even as you describe it. And camp, this sensibility that Eartha Kitt appeared to exemplify, especially is that chameleon that mocks seriousness. Sontag also speaks in the piece about the logic of taste (which totals up to a sensibility) - and surely I loved the exaggerated artifice, the so bad it's good posing, the glamour and extravagant sophistication (or role play of sophistication) that I heard in Eartha Kitt's songs - or saw in Helen's dances. This song - I'm Just An Old Fashioned Girl - was always a favourite of mine because its mockery was so clear. And while it was biting, it wasn't malicious. Of course that Eartha's black and that in this video she's very much the Southern belle gives it a whole other layer, but I hadn't seen the video then.


If it's true that many filmmakers actually want to be actors, then I have to say in my case, thanks to Eartha Kitt (who I discovered before I discovered Billie Holiday), I wanted to be a torch singer.

But I always wondered why it is that I had a taste for those things, what connection I could possibly have made with my own middle class world in a DDA colony on the edges of South Delhi.

Sure, as I've grown older I understand that there's an intrinsic irreverance for the pomposities of left and right, for the pretentions of high taste that I liked (and unlike Sontag, I don't consider this a-political). I liked this belief in experiencing something sensually as a way to thinking differently about the world. These are intellectual understandings I've come to value.

But I always wonder really about the community of the wounded that such Camp is really about - the stories of many who were great Camp artists have always been very tragic, very painful. Eartha Kitt's own early life was shockingly brutal - you can read her obituary here

And her later life was not always easy - perhaps because of the anger that those experiences created in her. Or, as better described in this review of one of her last performances (at age 81!)
"She spoke and sang in French, German, Turkish and Japanese. For every droll one-liner about loving men for their money - I'm Just An Old fashioned Girl - there would be a moment of almost unbearable poignancy that spoke of loneliness, and love lost or never realised."

I feel curious about these paleo-channels of sensuality, pain and glamour through which people find each other figuratively; I long for an archaelogy of these connections. I want to be able to say what I feel in clear words, but of course, that's not what the quick turning away from pain, which is the performance of amused - and amusing - detachment, allows for.

As for Eartha Kitt, I also think she was a great subversive because of the suggestions rampant in her voice, the raised eyebrows of a challenging invitation in her upturned phrases. How amazing that amid the dulcet male Lataji type notes of Pat Boone and Jim Reeves and Karen Capenter, All India Radio should innocently play, under the comforting moral guardian notion of "golden oldies" some growling song whose lyrics go:

"I want to wake up in the morning
with that dark brown taste
I want to see some dissipation in my face
I wanna be evil, I wanna be mad
But more that that I wanna be bad "

And not to mention

"I want to be horrid, I want to make news
And whatever I've got I'm eager to lose"

I have a lot to thank AIR for - that it allowed me to find women like this even if I never had the guts to actually be like that (but we can't blame AIR for that either. Or can we?)

Perhaps what I think was very amazing about women like this was the uncompromising relationship with the intellect. Their sensuality, while bodily too - Eartha Kitt remained a bombshell to her dying day, through assiduous exercise and no doubt, some face lifts - was also an intellectual product. I used to like Madonna for some of this quality at first, but somehow I think she never kept it that sharp as the years went by. Clearly Eartha didn't think so either because at a stage performance of "Santa Baby" (which is below) she said "I used to have a lot of fun with this song. (beat) (beat) - and then Madonna sang it."

A lot of people have sung that song - but I think what one sees as one watches the different videos is this: with Eartha Kitt there's a kind of ambiguous, unnerving, dangerous, very strong sensuality which is thrilling; with others, there's a sort of packaged post-modern playing with pornography but not really cuteness that's got its own sexiness (I've always thought Kylie Minogue was a hot one) but it's a predictable, easy and entirely unthreatening one, a Cosmopolitan sexiness.

Ironically, and fittingly, Eartha Kitt died on this past Christmas Day, 2008. I hope Santa Baby is getting her all the gifts she might need to be evil in her dissipated other life.

Anonymous said…
Eartha Kitt was and will continue to be a legend. I just found out that she starred in the Emperor's New Groove, how funny
January 4, 2009 at 9:33 AM

Anonymous said…
i love that song! (old fashioned girl). it makes me love it a little bit more knowing that eartha also used to be catwoman.
January 14, 2009 at 8:31 PM