Bas ik jhijhak - to Papa on his birthday

November 11, 2016
Since my father passed away in 2005, I’ve tried on his birthday to write something for him, to remember him in. I haven’t always managed to do it here – of late it has been small things on Facebook I guess. Today too, it is almost the end of the day when I have the opportunity to write this, a fact that as usual would have made him tsk tsk about my misplaced priorities, my lack of real discipline.

There were many things about my father, which, as time has gone by, and as I too am older, with a head and heart more weathered than before, I see now, were truly special things. One of these was his love of poetry, especially Urdu poetry. As a child in Lahore and even after moving to Delhi during Partition, he had studied only Urdu and English. I am not sure where his great love for Urdu poetry came from actually – whether it was part of the cultural milieu or whether he had acquired it from some friends. But I knew it was always there. Ghalib was his favourite poet. I did not understand most of what was being said, but I used to enjoy always, the relish with which my father would quote an apt verse when an incident or utterance warranted it.

I loved that relish in my Dad. He wasn’t as such a flamboyant personality. But he had a lightness and an appreciation for beauty which translated into a kind of simple, everyday stylishness, not flashy at all. I think perhaps it was not uncommon in men of his generation, of a certain type. His relish when reciting a couplet would be for so many things – sometimes he would quote one and say, bada hi khoobsurat sher hai. Yeh lafz bahut khoobsurat hai. It could be the words, the meanings, the cleverness of the craft or the delight of having remembered the poem. This would happen often especially when he and my mum were playing cards with their friends and people were laughing and bantering. Sometimes my mum would reply with an answering couplet as is the norm in the remembering of Urdu poetry. If they were getting along well he would laugh – this laugh, in the picture below and say “Wah! Kya baat hai” and repeat a bit of it. 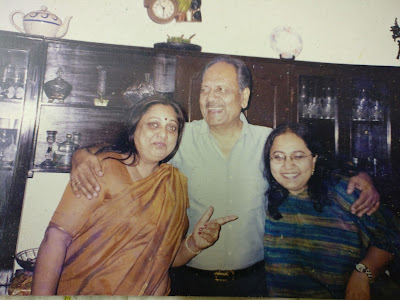 But even if they weren’t getting along at the time, or had perhaps argued earlier or something, he would usually smile and appreciate the beauty of the verse.

I think now how lucky I was that I grew up with this playfulness and pleasure and  urbanity around me in such an everyday way. There was no affectation there, only affection really. Poetry was not made esoteric, but meant to be part of life. Poetry illuminated life. Poetry made enjoyment happen. Poetry could make you close your eyes in pleasure and let it self be felt on your skin. It was not given special status, but simply showed me how each moment could be special, how life could always give you a chance to make your eyes sparkle, how putting a sparkle of enjoyment in someone else’s eyes was such a normal, easygoing thing to do.

He was the same about clothes and food and conversation. It was never a mark of sophistication. It was simply a way to live life tasting its pleasures and pains with a certain warmth and gentleness I think.

I miss that about Papa. I miss the lightness of his love. I miss the smile in his eye – I miss his gentle sense of fun. I look for it everywhere I guess. I try to be that way – though I don’t know if I succeed very much. Sometimes I am rude and impatient in so many ways, in a way he would never ever have been because that was not ‘the way.’

I think what my father taught me through all these things, was that it was possible to sample life’s pleasures, even perhaps submit to them, and still be very decent to others. The two almost were a part of each other – though I am not explaining that well. There was none of that moralism about decadence in his aspect – or in my home and in things I saw my parents do. He was always game to make another person’s party work, to take the trouble to dress up in costume with my mum for a fancy dress or theme night (though my mum was the one who came up with these exciting schemes usually)– as in this Shaam-e-Avadh party below. 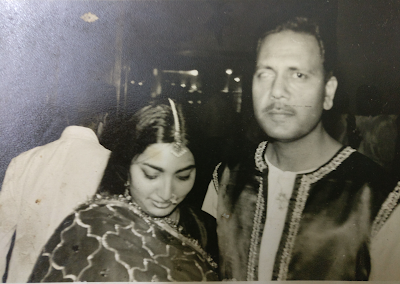 In his ability to be convivial, what I saw in my father was respectful behavior with other people, even if he did not like them, the ability to be courteous to people he might even have been prejudiced against (and he had his share). This to me was a poetic quality, it is the humane and measured quality poetry creates in us.

My father loved Begum Akhtar and would sing her ghazals often. He would tell us stories about how, when he was posted in Jodhpur, he and his roommate, “Chuha” Pathak (nicknames being a bit Air Force thing) would listen to her ghazals on Radio Pakistan, from across the border. “Chuha Pathak would fill a glass with rum” he’d tell us. “Then he’d stand looking at the sun, going slowly, slowly down. As soon as it set he would start drinking. That fellow I tell you. We’d have our evening drink and listen to Begum Akhtar or Iqbal Bano.”

My father’s favourite ghazal was one that went “Bas ik jhijhak hai yahi, haal-e-dil sunane mein.” He would sing it sometimes at parties or to us aise hi. I never heard a recording of it but it never occurred to me to look even when I grew up and began to like Begum Akhtar myself.

I did ask around for it sometimes – did anyone have a recording – because my dad would’ve loved to listen to it, but never did find one.

When my father fell sick, we spent many days in hospital chatting in a leisurely way, during his chemotherapy. These were strange days, especially as it became undeniable that he would not live. Strange because I have never quite felt love as a size, you know. We think of love as intensity usually. But in those days, trying to care for him, always seeming to fall short, for pain, physical and emotional seemed unpreventable, I felt love like a large box in my heart, heavy with pain, but also heavy with purity. It sat in me leaving no place for anything else – for nothing else was needed but to feel this love for my father, complete with the pain of confronting loss. What was the choice after all. What would be the point of preventing your heart from the last chance to love the one you love the most? Even for me, who fears hurt and pain and guards myself with such masks of casual transparency.

One of those days of his illness, I asked my father to teach me the ghazal. I wrote down the words, I practiced it line by line. There was a lightness and heaviness about the moment. It was nice to distract ourselves from his pain, his fever. And yet it was underlined by the knowledge that I was trying to hold on to things that I was now going to lose forever. But we sang that song, I learned it well.

I eventually found the song on the internet some time after my father passed away. This 11th November, it’s the 11th birthday without him.  I had wanted today to record myself singing the song for Papa today.

But I find grief is strange – it changes, losing some of its clingy sense of being on your skin all day all night all year, over time. I now have the sweetness of being able to speak about my father without feeling wretched, without that piercing emotion of loss, And yet it is always there, just like that love, the poetry of that love for Papa is always there in me. So though I have I find I cannot sing it without crying – therefore it is not here. Bas ik jhijhak hai yahi, that I cannot sing it without crying, today, though of course many times I can.

Surely Ravi Karan Vohra, like a perfect dad would have said, beta, very nice if I’d sung it, for sabka dil rakhna, that was him. But without a doubt, he’d have liked Begum Akhtar better.
So here she is - and Happy Birthday Papu, wherever you are.

And here is the beautiful ghazal by Kaifi Azmi -

parodevi said…
Thank you Chronicus Skepticus
Perhaps it was a generational thing, but we're lucky then to have had it in our lives :)
November 13, 2016 at 12:02 AM

Space Bar said…
I have not checked my blog feed in months and so I've just seen this. Such a lovely post and the photographs. We just looked at old photos, which are much better to look at than recent ones where parental units show all the frailty they seem to disguise face to face. Many <3s.
December 7, 2016 at 8:25 PM

Lovely post.
This is an amazing Article in terms of information, content and user readability. This blog is a representation of an extraordinary effort and research. I would like to address you about a similar website which delivers the best effective, authentic and efficient content on Astrology, Indian Hindu Calendar, Festivals like Ganesh Chaturthi 2017, Dussehra 2017, Kundali Matching, Janam Kundali, Purnima 2017, amavasya 2017, Gender Predictor and Chinese Gender Predictor. This website is one of the leading website in India in this vertical (Astrology). Your website is so impressive. Keep doing the great work. Cheers!
--
Thanks
Aaru Garg
A Member of Sun Sign Calculator Team
August 20, 2017 at 10:33 PM