"I love to make a cup of tea for him when he comes home. Or just listen to him tell me about his day. I’ve more of an identity than a lot of women do with their so-called individuality."

I want Trishala to come back: Maanyata


"If you thought Maanyata Dutt had retired in a sulk and was licking her wounds after being “denied” the opportunity to contest the Lucknowparliamentary constituency election in husband Sanjay Dutt’s place, think again. The spunky woman has put politics out of her mind and is thinking in terms of building up her family instead.

“I’m 30, my husband is almost 50, if we don’t have a baby now it will only get more difficult. We’re trying very hard to become parents,” she admitted. “Once I’m a mother I will have no more ambitions left. If this means being in my husband’s shadow, then so be it. I’m happy being Mrs Sanjay Dutt. I love to make a cup of tea for him when he comes home. Or just listen to him tell me about his day. I’ve more of an identity than a lot of women do with their so-called individuality.”

There’s more to this family dream of Maanyata’s. She’s keen on getting Sanjay’s daughter Trishala, who is studying in the US, back home to them. Not to be her step-mother, naturally. “I’m more like her friend,” Maanyata said. “There’s a difference of just six years between us. I’d love to bring her to our home after she finishes her studies. The family will be complete then.”

Whether Trishala, who is staying with her maternal grandparents in the US, thinks along the same lines is doubtful. She had expressed her reservations when her father took Maanyata for his bride against family wishes two years ago. But, since then, it is believed Maanyata has worked on breaking the ice with the headstrong young Dutt girl."

After this what? Trishala comes back and goes into murderous quandaries, subverts Hamlet?

Or maybe something more realistic - Maanyata gets her own cookery show.

I'm wondering if I should send SRK a slice of the focaccia I've been making? Would it win his heart over for me? Or any other part? Which will also chalega. 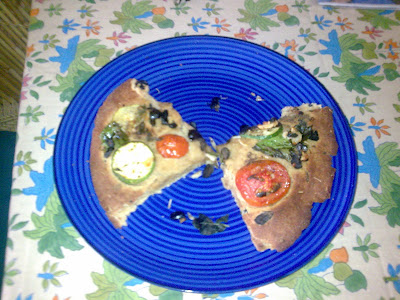 Of course I will send a picture which does not reveal that I have symmetrically consumed some of it already.

Banno said…
I know! I found myself with mouth wide open too in disbelief this morning.

parotechnics said…
hello banno - been traveling incessantly and when here daunted by the task of posting mexico pix have been slinking off from blog.
April 28, 2009 at 1:39 AM

Anita Vachharajani said…
god, i loved that piece. i had given up totally on the BT because it's all paid inserts about weird sidey designers. but this was the stuff of pure drama and delight... i love this lady, even her pr has this scintillating edge to it. wah.
May 3, 2009 at 6:16 AM