Tea for two - and everyone else 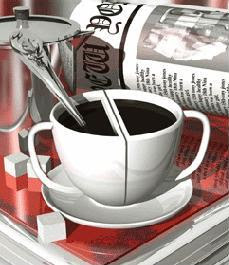 There is nothing more and plenty more to say about the attacks in Bombay this November end.

Watching the news has been frustrating, both for the kind of news and for the kind of views being bandied about. The one thing instantaneous media seem to resolutely deny the need for is reflection. Reflection inherently requires time and thought. But the very next day people want to talk about Solutions. Anyway, more about that elsewhere...

But another thing that makes me marvel is the easy talk of the Taj's iconic status. I don't want to be callous about those who've suffered directly by indulging in reverse classism. But I do think that before Ratan Tata and others demand that the Taj should be protected as PUBLIC icon, it needs to do something about becoming one.

Terrorists understand what really divides our society - and they've hit out at the things that they know we really value. They understand that the temples of modern India, like of the US, are the icons of absolute self-interest and greed, such as five star hotels and the WTC. Apart from whatever warm and fuzzy things they represent, they also stand as symbols of the extreme class divide of this country, the absence of the working poor and the dying poor in our mainstream consciousness; the divide which is a daily terror we do unto our own. As long as we live in this culture of self-interest alone, I really don't know how we are going to have a changed world. I mean the world has to actually decide to change, not just demand something else does. This is the sort of culture that makes Ritesh (no I won't spell it numerologically, what's he going to do about it?) Deshmukh and Ram Gopal Varma go so openly to prey on the event and shows that there is no lag between an occurence and thinking of what it can do for you.

So anyway, here's something I think the Tatas could do, just symbolically so that maybe the cliche of indiscriminate openness that people bandy about without a thought can be a little more true. Because after all, why should only the cabbies, the dabbawalas, the train commuters and the other regular folk have to bear the onus of maintaing the spirit of Bambai?

I think when the Taj is fixed up and restored, its ground floor sea fronted rooms should be turned into a public tea-room where not only the rich, but all sorts of people, can come in and afford the price of the tea. A place they keep as clean and lovely, if not as plush, as the rest of the hotel. A place which says - this building is a Bombay icon because the wealth of this city which was generated as much by workers as by industrialists, has also made it so - and this tea-room is a token participation in that idea. I think this would be a simple gesture and a step towards erasing those hard lines that keep one type of Bombayite far away from another, indeed, indicating which type of Indian citizen benefits more from our supposed democracy. Those are the things we also have to work at changing besides holding governments responsible for their duties. That won't require much money from them. But it would require a bigger heart.

I'd been getting the feeling that (not all obviously) many people mourned the hotel more than the people who died in it.

Destruction apart, isn't the reason this has become such a big issue is because it hit those who can commandeer airtime. We have to thank Shyam Benegal for reminding everyone that people died in CST too. And Madam Simi Garewal should stick with her simpering interviews. She showed a rabid side on TV last night, few recognised hardliners might have.
December 1, 2008 at 12:43 AM

Anonymous said…
Actually, now that you point it out, I wonder aloud what Taj Hotel means to me, a middle class Indian. Because of it's very name, and also its appearance, it reminds me of a Taj Mahal that I have seen as a kid.
In fact, I felt a stab when i heard that a tomb had been destroyed.
And no, i didn't bleed as much for the rich, or the foreigners. There is a slight jealousy I harbor for those who drink a cup of tea for a couple of hundred bucks.

Your idea, your solution is very beautiful. I would love to hear more such thoughts from you.
December 1, 2008 at 9:49 AM

parotechnics said…
Grasshopper thanks - any chance you could be Ratan Tata? Well, we should be so lucky...

Anita Vachharajani said…
Today NDTV had a full half hour thing on Taj with footage borrowed from Zafar Hai ( chee thhoo) ..and an interview with him too..( puke puke)
Tracks and jib shots se bharpoor! (hai hai)
Poor UTV news could not find anyone big to take some sound bytes so they went to Ronnie Screwedwala - really!
Amit
December 3, 2008 at 10:39 AM

Anuj said…
i am wondering whether terrorists really thought about 'class' - because this time they bombed cst too...(i just think the class debate is all our version of analysis. but yes, i too like the idea you have put foth regarding how we can truly transform taj as a public space...
December 13, 2008 at 5:32 AM