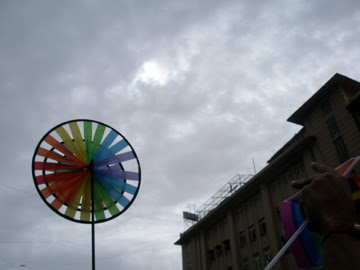 A producer I'm writing for says - I'll call you in the afternoon, after I've read the draft. I say - actually you won't be able to reach me between 1 and 5 because I'll be at the Queer Azadi march. ""Oh," he says, "is that today?" Yeah I say enthusiastically. I wait for him to say, "Maybe I'll come too." He says, "Ok I'll be sure to call only after."

The day of the march my aunt and uncle stop by for raksha bandhan on the way to their farm, where they go on weekends. My aunt says, "why don't you just come along with us?" I say, would have been great to. But today's the day of the Queer Azadi march, so I definitely don't want to miss that. I see her trying to look poised even while her brain makes loud noises - is that why she's not married? But unlike in my youth when I would have only zoomed in on the disconcerted look in her eyes, today, I am impressed by her desire to remain poised, as if it's absolutely routine. I don't put her out of her confusion by clairfying.

I do clarify with my mum though - it's important the rest of us go to show support. In fact we're thinking of renting some kids to go along. 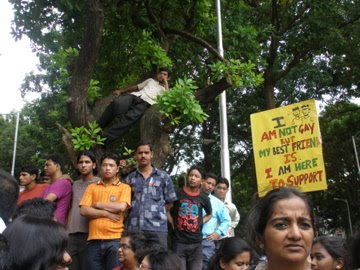 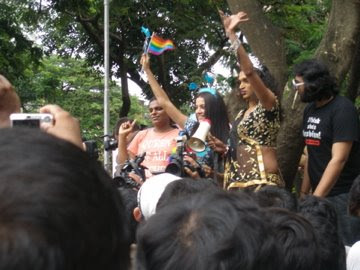 I wonder if Celina Jaitley clarified to her mum too. Later some older activists I am chatting with make some laughing but disparaging comment about her outfit. I of course a) loved it b) think she's redeemed all the bad acting with her presence while the rest of showbiz types stay away, even if their best friends, or at least best designer or best make up man are gay. Bollywood folks one expects nothing from. But I thought advertising types would come at least. Ah well.. 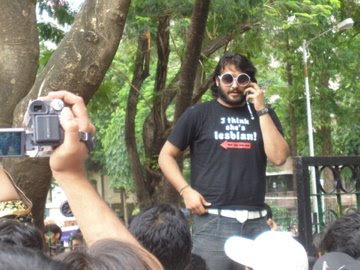 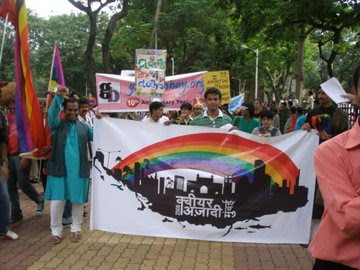 It's been a long time since I've been at a rally where there are people of different classes present. A very South Bombay man in a fantastic rainbow boa and holding all manner of cute, come-on toys - rainbow coloured rattles mostly - tries valiantly to shout along with slogans. But "teen sau satt-at-at-at-sathar- satathar" is his defeat. But he keeps trying, which is entertaining for me and I end up giggling more than shouting slogans. A drag queen in spectacular high heels soon learns that performance requires rigour and has to take off the stilettoes and walk in green stockinged feet. People look on as always, although not as many as once used to, during the walk up to Chowpatti. Although they are the kind who can say teen sau satatar without a hitch, they don't of course know what it is or for that matter what sort of disease this homophobia is that we keep saying down!down! to. Moreover, since we keep saying 377 Bharat Chhodo, I am sure most think this is just an eccentric Independence day parade. But they kindly desist from saying, angrezon ne bharat chhod diya. 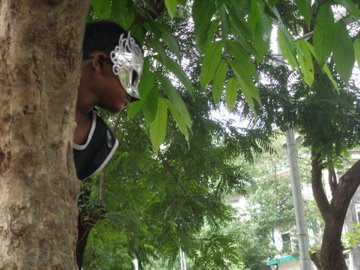 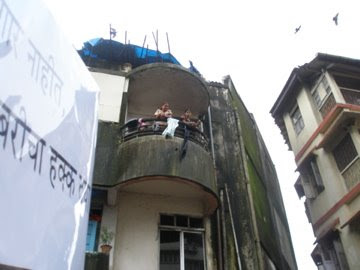 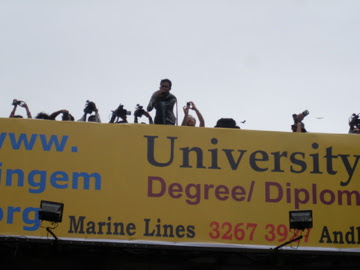 The press coverage was huge and it was nice to see - not homophobic.

The parade was not as flamboyant as I imagined, New York being my unrealistic index. I think in coming years it will be. But more than entertained, I was very moved. Because I meet most of the people in the parade in "progressive" contexts where sexuality isn't much of an issue in our interaction, I forget what it must be like to deal with families and the regular world, especially for the older people present who must have suffered a lot more harshness and loneliness. They are euphoric about being able to walk on the street and shout these slogans and dance and sing. A woman has covered her face so completely with dupatta and mask because she doesn't want her kids to know, that when she says hullo to a friend, her friend doesn't recognise her. Someone yells loudly - Paro! I turn around and say, what? thinking I will be instructed to walk in pairs or hold some placard. But she simply says Paro! again and hugs me in a state of excitement. It makes my eyes fill a little to see people so happy.

It also made me smile to see a couple of heterosexual men I know who had come to support. Their body language was a picture of awkwardness. As soon as we reached chowaptti, they scurried off calling out that non-partisan slogan - Taxi!

Some nights later a friend told me how hard some lesbian activists worked to get police permission. Apparently the traffic police guys wrote a letter saying - I have given them a fair hearing and their purpose is indecent so I cannot grant permission - or roughly that. Permission finally actually came through only a day or so before.

I just want to note, that we could not afford to rent children. I went in sadly un-flamboyant clothes (why try to compete with drag queens yaar?). Hansa, to make up for absence of any trappings of middle class morality, wore her most aunty-ji salwar kameez. I'd say it was a good attempt.

Banno said…
Oh, wish I could have come too. But couldn't make it.

chamcham said…
hi good to have you back and blogging. lots of my friends went down from delhi for the pride march. So yeah nice to read about it. But must say sexuality is a huge issue even in our "progressive" contexts. At least that's what I feel, being a dyke and being pretty much on the other side of the line. It's quite subtle, and you can't take anyone up on it because they'll never admit to homophobia because homophobia is so uncool.Here's a little story: a friend I once came out to got all excited and said she wanted to make a film on lesbians in Delhi. I said: really, what kind of film. She said: portraits that show a lesbian just like anyone else, [basically a spot-the-differences kind of film]. Oh, I said, but didn't think more about it. Then: she wanted me to introduce her to some babes. Sure, I said. And one evening, when headed out for a drinky with some hard-core bonafide dyke types called her up and asked if she wanted to come along. She quailed and said, but what'll I do there? I'll be so out of place (!!!).

I guess she hadn't quite figured that dykes really do look (and talk) like other people :)

And god, you have to try the strange experience of being patronised in a friendly way by straight people!! Something like we-like-you-but-you-won't-understand-this-part-of-life-because-you're-a-dyke. Happens all the time. Especially with the leftist progressives. At least the right-wingers leave you well alone.
September 5, 2008 at 6:56 AM

parotechnics said…
Banno: mea culpa. It was a very hot day and I was starting my period so I was totally spaced out and ended up taking very NG pictures. If you click on the Celina pic you can at least see the turquoise blue antenna with hearts at the tips. She was dressed as a blue fairy. As for Hansa's pic - don't know what I was thinking. But I have a harried picture of her in the corner of the second photograph, sigh.

chamcham:I agree with you, hence the inverted commas around progressive. But from the straight side I have to provide another insight and say that I am sure I felt an initial uncertainty when I was young not because I was an uncool-ly homophobic but because in a sense alternative choices seemed so very cool that I always feared looking square. But anyway, when one is dealing with people as types or clumps that's already a problem because you are also turning yourself into a type or clump in order to have the exchange - or will have to I guess and it inhibits you. That goes for both sides.

Anyway that said, I always find this discussion difficult to have because as i've grown older my relationship to ideas of sexuality or even identity have become a bit more interested in the feeling of the continuum rather than the particular points; more curious about eroticism than about sexuality maybe..
September 5, 2008 at 10:49 PM

But it DOESN'T go for both sides! There is something about the straight progressives - remember your film "Death of a Minor Goddess" (where do I get off, asking you if you remember it!). Anyway, remeber that ultra-nice babe you interviewed on some rooftop who sort of lost her cool with you somewhere and snarled something like "I don't like it, that's why!" It's that tone and expression of refined distaste...
September 6, 2008 at 3:57 AM

parotechnics said…
chamcham: you're very funny. And you're basically right. The woman on the rooftop said, "because I'm telling you again and again, the smells are very strong and are beliefs are very strong and when we don't want to change our beliefs why should we.."

There was a girl in a classroom in an earlier film of mine where there was a discussion about being mistake for being lesbian and she got that same tight innocent indignation; the tone that says, it's a matter of personal taste, not prejudice! Anyway it's funny because turns out she's doing her PhD abroad and one of my friends who's just started teaching there is planning to show the film to them. I wonder what her response to herself will be now :)
September 6, 2008 at 7:35 AM

parotechnics said…
This comment has been removed by the author.
September 6, 2008 at 7:35 AM