Yes, Chandamama has brought out a 60th anniversary collector's edition and I wasted no time in getting it. Chandamama, Phantom, Mandrake the Magician, Flash Gordon, Target and Children's World - everytime we were transferred to a new place my dad would order these to be delivered by the newspaper wala. Being very young I couldn't quite keep track of which day was what so the coming of the comic was always a matter of great excitement and each page would be instantly relished in the lush hours of a Sunday morning while my parents slept late and the house was absolutely quiet.

My favourite was Vikram aur Betal (which the book unfortunately calls Vetal which is NOT how it was in the original!) - it seemed to prolong the pleasures of the Amar Chitra Kathas being a long detailed prose story, rather than a comic, and with its tantric type of illustration it sent a thrill of fear for me.

Always seemed to me King Vikram's uniform was a bit East India Company but these quibbles I will leave to the culture studies folks. After all unko bhi tho PhD karni hoti hai.

I don't doubt it will all seem totally retrograde now when I read it but just looking at those illustrations made strong feelings of nostalgia uncoil in my tummy and suddenly my ears began to echo with the sound of that song from the DD show....

And you can watch that here for the opening song

Even watching it now I feel it has a compelling narrative power and at a cultural level it's rather interesting to watch the cast of the Ramayana just before their Ramayana corpulence and glory.
Especially the redoubtable glee with which Sajjan plays Betal 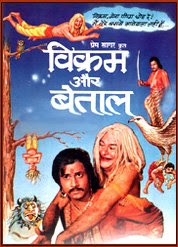 In the words of the director, Prem Sagar

Why Vikram Aur Betal was made ahead of Ramayan?
We did it as a test market product. We were given the 4 pm slot on Sundays. For a 3,500-year-old story, it was a real bad slot. But it was a popular programme and started a new trend of special effects.

(An era of special effects! But these are more tolerable than the Ramayan ones because people don't look beatific in tandem with flying arrows. Here it's more like decapitated bodies and flying demons. Good stuff.)

I think I was quite grown up and still used to watch it rather avidly - after all what else did I have before there was Buffy the Vampire Slayer.


And in a 6 degrees of separation thing - the scriptwriter of the serial also wrote a biography of my grandfather (which is in Hindi so I haven't read it yet...)

Anonymous said…
nitpick alert, ur granddad's biographer and this scriptwrite dude aren't the same guys- they only share the first name. The scriptwriter was a Hindi satirist.
April 21, 2008 at 12:34 PM

parotechnics said…
Anon: Oh no there goes my 6 degrees moment for the week. But, it figures, certainly the writer of Vikram and Betal has a lot more verve ( I say with confidence not having read the book but hey..). Thanks :)
April 21, 2008 at 5:54 PM

Banno said…
I'm going to get the Chandamama thingy too. It was the same for me. The day I came back from school, and Chandamama had been delivered, was blissful day. It was Ok to get a remark for not doing homework the next day.

Anonymous said…
Dark was the night and eerie the atmosphere. But intrepid King Vikram marched on..... Oh incomparable.

Was thinking of Chandamama the other day, and you Tinkle will not appreciate the connection - but doesn't Shivnarine Chanderpaul sound like one of the characters straight out of one!
April 21, 2008 at 10:44 PM

parotechnics said…
Vidya: Who is Shivnarine Chanderpaul. He sounds like a character from A House for Mr. Biswas, not Chandamama.

Banno:It's with a sinking heart I realise that people our age will be the main buyers of this volume. Soon there will be a term for us (as long as it's not baby boomers perhaps we're still ok). The biography is called Ritu aaye, ritu jaaye - ritu being season, not a lady. Although..
April 21, 2008 at 11:48 PM