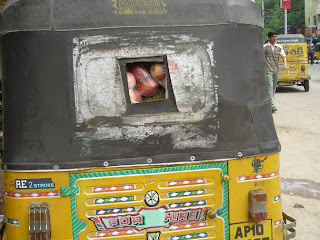 
As a child I lived in Secunderabad - from the time I was 7 till I was 11 and perhaps for no other reason than that it is an impressionable age, it left an impression on me. In Secunderabad I made the big reading transitions: went from Enid Blyton to Nancy Drew, Amar Chitra Katha and Indrajal to Asterix and Tintin (although I still cannot resist acting like Ming the Merciless and saying out loud in my solitude: we'll met again Flash Gordon, ah hahahaha! Ok, maybe I shouldn't admit that but anyway no one reads this blog so it's alright) - and also, with needless and uncomprehending precocity, Of Mice and Men. And since I lived mostly in my head like most ill-adjusted kids, these were big signposts for me. I found a porn novel called The Barn with its reddish page edges, its busty 70s Bond girl cover and read it, also a bit uncomprehending but definitely, um, impressed, over there. Since then the musty smell of old library paperback stirs up a sexual sense of the forbidden for me. I had my first crush, on a boy who wore red socks and played cricket near the colony park in Secunderabad. It's true these experiences would have happened were I in Bhopal, Bhatinda, Agra or Nasik and would then have rendered those places special in my mind. But, it was in Secunderabad, and with its sleepy air, its small market lanes, its old bungalows owned by Parsis and anglo-Indians called Anne and Fiona; with our scrawny young custard apple tree and green paisley sofas and round shaped lawn and hot, quiet afternoons when parents slept and we prowled unserveilled, doing nothing much but feeling racy anyway. 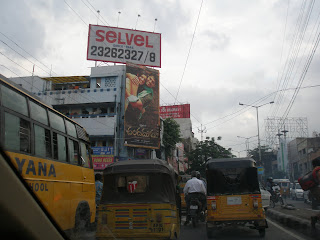 And I guess it meant something that it was in Secunderabad and not its more famous twin Hyderabad, which was distant, across Tankbund and to which I went only three or four times in my entire time there.

Because one heard so little of Secunderabad in the public domain, it could remain forever private, my own place in my head. Also, Secunderabad, which was primarily a cantonment space did not change as fast and as drastically as Hyderabad. When I finally went back as an adult I was charmed to see that some bits, were still recognisable and discernible as part of my memory. And the truth is, there's also something comforting to me about cantonment spaces, edged with whitewash, stolid with grey stone, the neat brick borders of trimmed lawns a suggestion that there is a mai baap, a strong force that will take care of you (Sigh, patriarchy).

Yes of course the city center had changed - Nanking, once fashionable had become seedy, and the old colonial buildings were crumbling and shadowed by flyovers. But old things could still be suddenly seen, like Zam Zam bakery, which opened while I was there and it still had the same low rise small town feel. 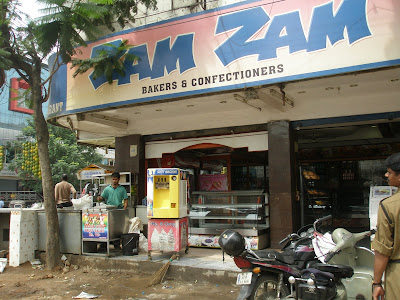 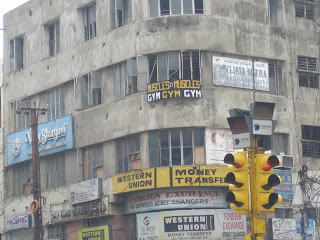 Since then, I always take the chance to go back to Secunderabad when it's presented. It's another one of those places that feels to me like it is home, a place where a bit of my soul is stored, like a horcrux.

The first couple of times I went there I tried desperately then to re-get the feeling of the past. I went to Secunderabad club, found it so changed, no more cutlets and roast mutton sandwhich or trifle pudding and other colonial delights; the old children's library was completely gone, only two musty remainders of a book series I loved - Folk Tales from India (one for each state) sitting wanly in the corner of a shelf. Also I started to launch this hunt for Crazy David, this guy who would sing at the club do's, wearing an afro and a medallion - Una Paloma Blanca was his signature song. When I discovered that Crazy David was dead, I realised the pointlessness of nostalgia rather flatly. A place always moves on from the place in your head, as much as you have moved on from it - the relationship between places and belonging presents a riddle to me that I haven't resolved.

So on subsequent trips I was more relaxed I think. I enjoyed the dense greenery of the Hyderabad Central University where I had gone for a workshop more quietly as I waited for students to return with their exercises. It was often raining and the air was heavy with dragonflies. 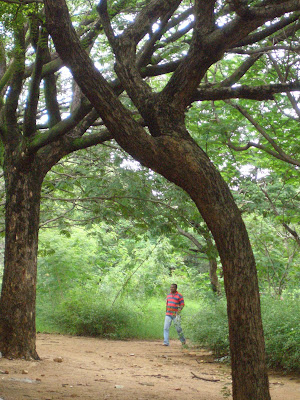 I now have new routines. Going to eat an ice-cream sundae for instance. When I was a kid there were all sorts of ice cream parlours serving fantasies in metal ice-cream cups: Honeymoon Specials, Dreamboats and Midnight Beauty's, jaunty with angled wafers and cherry-on-the-top. I couldn't locate any but you can still get a great tutti frutti sundae at Nanking and a near-satisfying one in the middle of the night at Pickles. 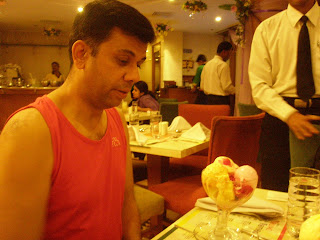 There are other pickles too.
I go see my dad's old airforce friends, GR uncle and Chanchal aunty. This time they made me my favourite Punjabi lunch of rajma-chawal and bhindi and pressed all these great pickles on me. As I complimented aunty on them with my mouth full she said scornfully "arre yeh maine thodi banaye hain! Yeh sab shauk tho tumhare uncle ko hain, achar daalna, chatni banana." 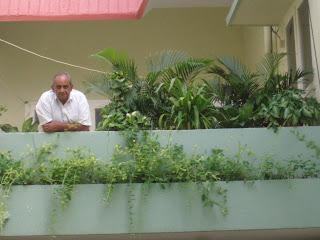 And obligatory buying bangles bit - when have I been known to pass up the chance to gaze at shiny coloured glass objects? But not in Charminar. This time I bullied my cousin into taking me to a street we always passed while dropping my nephew Naman to school. It looked old, and apparently it was the Jain section of town at one point - it's called Subhash Road. 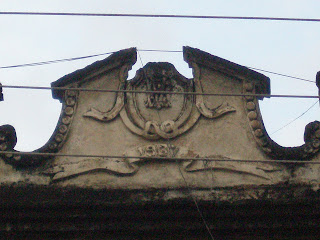 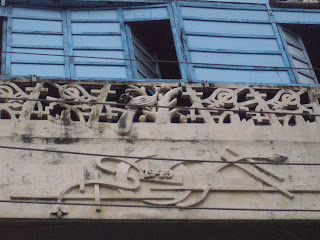 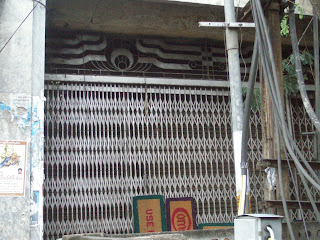 For me, what was interesting was that it was a big art deco stretch. And though noisy it didn't feel so hard to negotiate and we walked around till I'd had my fill of gazing and ambling and it had gotten too dark to see details. 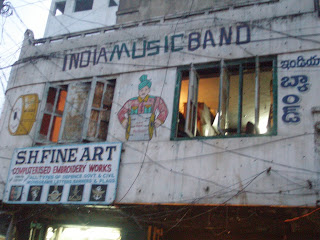 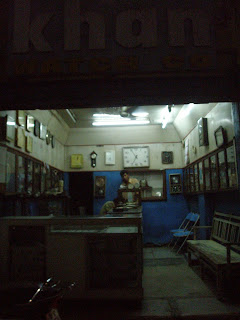 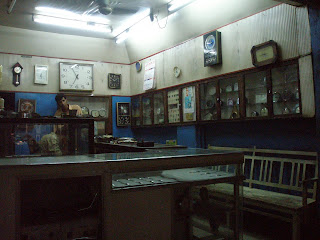 And in the latest consumer news I am sorry to report that I went completely nuts and bought several dozens of bangles. I can't resist, because it's only in smaller places that you get those old bangles which are paani ke rang - watery, lighter than light green, pink, gold - that make you feel like a princess, whether they're on your wrist or simply hanging on your bangle rack in the morning sun. 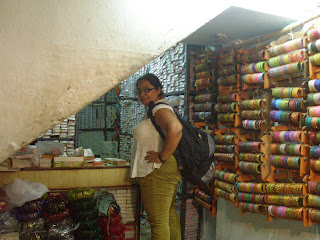 hansatin said…
dear ming the merciless, so many small bits of chewables in here, i will read again and again, to respond. lucknow is much more in the 'public domain' ( charmante, eh, dis use of de dese two words in association with the way one associates with cities!)i am wondering what i am trying to do in lucknow when i go there? get out of home and see a bit of the city, for one..and then when i do go out, i public domain it quite often, looking for begum akhtar's house, returning and appreciatingimambara
basically shaming the cool snotty kid i was, by looking for all thes e items of local culture.
hmmm.
secundarabad sounds like your own malgudi- real forever as was. and zam zam( is that the name?) bakery the proof that it is all real, always.
hmm, loved reading this, shall again and den again!
December 2, 2007 at 9:11 AM